The Spanish National Court has ruled against sex worker organisation OTRAS, who applied to be recognised as a trade union in August. On Wednesday, the National Court said recognition of sex workers in a union would ‘amount to the exploitation of prostitution’. OTRAS has said it will appeal the decision, and will continue with its activities.

On 4th August, it was announced in the state official newsletter that OTRAS, a sex worker-led organisation, had been approved as an official union by the Ministry of Labour. However, soon after the official approval, government representatives claimed it was a mistake. The President of the Spanish Government tweeted: “The Ministry of Labor, Migration and Social Security has already begun the process of challenging the "Sex Workers' Organization. Prostitution is not legal in Spain and this Government will not give support to any organization that organises around this illegal activity.” The approval of OTRAS was also criticised by feminists organizations, who demanded the Ministry of Labor refuse the application on the grounds sex work is ‘not a job’.

“The abolitionist women who have filed this claim possess all the rights of which can be enjoyed in a country that is part of the EC, as is Spain. And that is very good and we are happy for them, for their salaries at the end of the month, their paid leave, their unemployment benefit and without a doubt, their retirement plan is insured. For us, for the OTHERS, no.”- write OTRAS on their website.

In November OTRAS launched a petition to gather support for their organisation to register as an official union, which reached more than 2300 signatures within a few days. On 14th of November, sex workers and allies organised an action in Madrid, Spain, to garner support for OTRAS to be recognised as a workers’ union before the hearing in the National Court. They were joined by sex sex workers’ organizations and service providers from different regions of Spain. “After two years of preparations, of shuffling several options, of preparing ourselves, the time has come to present ourselves officially. Because the union struggle is the only way. We have to face up to abuses, false self-employment contracts or directly to job without contract rights”, say OTRAS on their website. 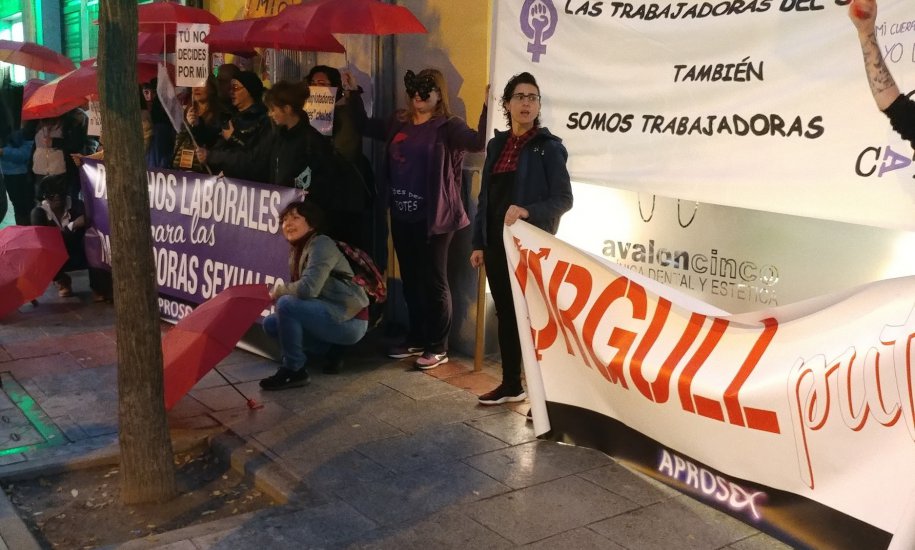 There is no special legislation around sex work in Spain, and selling and buying sex in Spain is not illegal. Third parties are criminalised and street sex workers are punished by fines in some cities.

A migrant sex worker who participated in the action said: "Spain lately is flooded with fake news of 95% of sex workers being forced to work, and it makes me furious when privileged women, who know nothing about sex work, are deciding for us. We hope our Syndicate will become the platform for fighting for our rights.”