A new sex workers' union has been formed in Ecuador, set up to visibilise cisgender men and trans people who sell sex, and to demand sex workers' rights in the city of Quito. Sindicato de Trabajadorxs Sexuales de Quito [Quito Sex Workers' Union] is made up of cisgender women sex workers, some 300-400 male sex workers, and around 50 trans people.

The Coordinator told press there was a need to include everyone who does sex work, especially those who are often left out of the discussion due to machismo or homophobia. The union also draws attention to and opposes attempts to criminalise sex work under the auspices of opposing human trafficking. 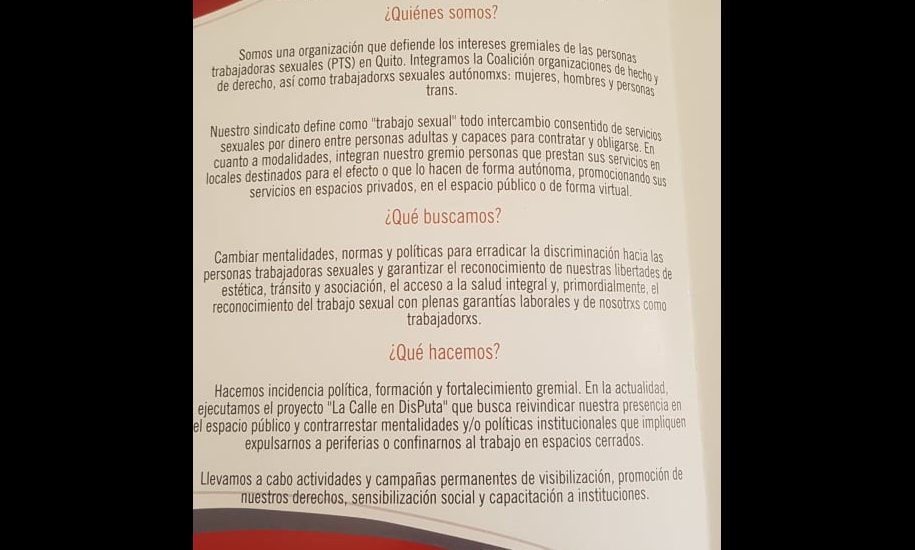 Sex work can be carried out legally in Ecuador if done indoors and with a permit, but there is a fear of stigma and of violence from both clients and the authorities, particularly among street-based sex workers. The group has spoken about the rights of trans sex workers, which are impacted by ongoing stigma and discrimination despite a guarantee to non-discrimination on the basis of gender identity under Ecuadorian law. The group argues for better protection under the law, given the widespread discrimination against trans people and sex workers in other areas of Ecuadorian society. The group undertakes various different activities, including health support and information, sports activities and film-making. They are in the process of creating union cards so their work can be more formally recognised.

Read more about the union here or see a short video here.