SWOP-USA is a social justice network fighting for the rights of sex workers, with dozens of chapters across the USA.

Tell us about your organisation.

SWOP-USA was founded by Stacey Swimme and Robyn Few in 2003 who were inspired by the grassroots organising of sex workers in Queensland, Australia, where sex work is decriminalised. The founding vision behind SWOP-USA is that sex workers deserve workplace safety, rights, and dignity regardless of our criminalised status. We were founded to: 1) Advocate for the decriminalisation of sex work, 2) Base build among sex workers to create a powerful social movement, and 3) Provide community for sex workers and their adjacent communities to promote safety and self-determination.

Community is at the core of SWOP and has been since its inception in 2003, when Bay Area sex workers rallied around school teacher and fellow sex worker Shannon Williams, protesting her arrest and mistreatment.

Also in 2003, SWOP co-founders teamed up with Dr. Annie Sprinkle to honour the victims of the Green River Killer in Seattle, designating December 17th as International Day to End Violence Against Sex Workers. SWOP-USA continues to honour Dec 17th by hosting a website with toolkits, global events, and annual list of names, as well as providing event funding to local SWOP chapters and related groups. This year will mark our 16th year observing December 17th.

We became a registered non-profit organisation in 2013, and over the years have grown to over 26 Chapters and over 300 members. In recent years our focus has become increasingly intersectional with our agenda expanding beyond simply decriminalisation and integrating racial and gender justice into our primary goals. One of the ways that we have done this is that we recently implemented a small stipend system for our board of directors, who manage the national organisation. Additionally, aligning ourselves with organisations focused on prison abolition and combatting the over-policing of our intersecting communities has come to the forefront of our work.

The FBI seizure of Backpage and the subsequent passing of SESTA/FOSTA (The Stop Enabling Sex Traffickers Act and Allow States and Victims to Fight Online Sex Trafficking Act) rocked the sex worker community in the USA, and had impacts internationally. SWOP along with many other USA-based sex worker organisations worked diligently to educate the public about the chilling effect that SESTA/FOSTA and curtailing speech online will have. We also ran a strenuous communications campaign working with journalists and outlets to try to prevent the passage of SESTA/FOSTA, and when that failed, worked to highlight the detrimental impacts on sex workers to the general public.

In 2018 we brought over 20 sex workers to Washington D.C. to speak directly with their congressional representatives about the devastating impact of SESTA/FOSTA in conjunction with Survivors Against SESTA. While SESTA/FOSTA has had truly devastating impacts on many sex workers, it is also worth mentioning that this impact has largely been on indoor sex workers, whereas outdoor workers or those working in greater precarity have discussed at length how they have always faced heavy policing due to their visibility. Regardless, SESTA/FOSTA presented a huge challenge to our community and in part spurred SWOP-USA to hire our inaugural Executive Director in the spring of 2018.

In August 2019 we hosted 60+ sex workers in DC for an organiser institute as part of the Woodhull Sexual Freedom Summit.

We continue to facilitate the collection of names internationally for December 17th, and our new website for the first time is immortalising each sex worker with their own entry. Friends and family are encouraged to share personal memorials of their loved ones. No one deserves to be forgotten, and we hope that by honouring those that we have lost we can increase the awareness of anti-sex worker stigma and ultimately come to a day where December 17th is a day where we have no sex workers murdered in the year previous.

Where does your work take place?

There are approximately 30 SWOP Chapters and fiscally sponsored Projects spread out across the United States, we have an overall membership of over 300 individuals. Many of our Chapters are in high density urban areas, but we also have Chapters that represent southern rural states or in small towns. The list on our website is perennially out of date, but we try to keep it as current as possible.

As an organisation we are primarily focused on developing leadership among sex worker organisers, we also have a national advocacy and strategic plan, but all within the scope of providing resources and mentorship to blossoming activists. Our Chapter and Project structure encourages individuals to collaborate at a local or regional level to establish their own policy and service priorities. We work with our Chapters and Projects to develop skills in event planning, street outreach, fundraising, and community organising. 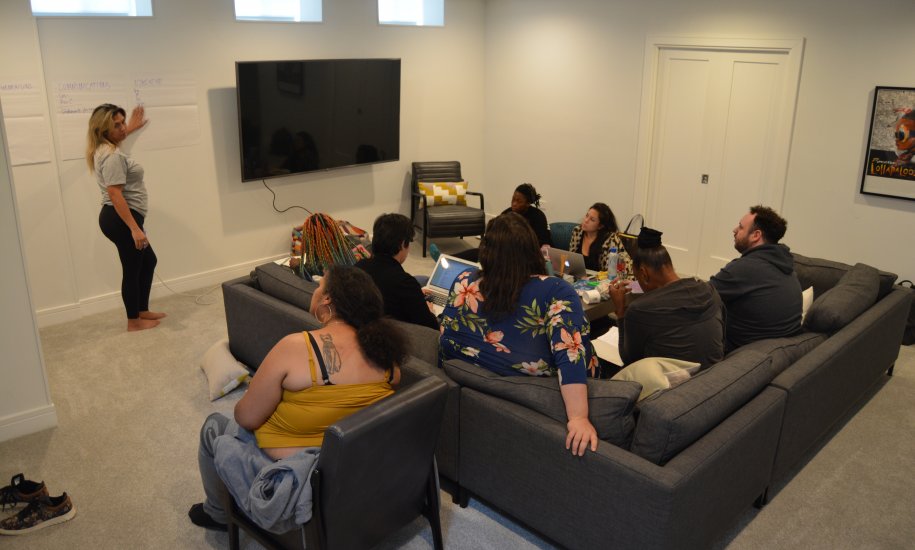 Do you provide services to sex workers?

SWOP-USA does not provide direct services but many of our Chapters and Projects participate in harm reduction based street outreach programs. These programs also at times collaborate with local social workers or other care professionals to provide additional services. We run a hotline available to sex workers staffed by crisis counsellors: 877-776-2004.

Do you do political work, or campaigns?

First and foremost, we are an organisation that is fighting for the full decriminalisation of sex work in the USA. Intersecting with that work is the fight to dismantle the prison industrial complex; prevent and counter police brutality; agitate for affordable housing and healthcare; and combat white supremacy and hetero-patriarchy at large. These are obviously huge struggles, struggles that span many social justice organisations across the country and impact both sex workers and the general public. Decriminalisation of sex work in the USA is one vital step towards a more just world, but it is just one stone in a very long path. We provide various educational and anti-stigma resources both for sex worker activists and to educate the general public.

SWOP-USA and our Chapters operate with a fair amount of autonomy from each other, with SWOP-USA primary serving as a fiscal sponsor to Chapters and Projects. We are united through a common mission and set of values.

The SWOP-USA board works to create shared resources for our network and the movement at large. While operating with some level of independence, the national SWOP-USA board shares national agendas with Chapters for feedback throughout the process. This is a relationship that we are still exploring and refining as we develop as a national organisation made up of diverse sex workers with distinct needs and contexts.

Tell us something you have worked on recently.

SWOP and our Chapters have historically been entirely volunteer-run, and while much has been accomplished under that model, we also found that it tended to centre similar demographics of sex workers. Sex workers with some level of free time to commit to being a volunteer, tend to for the most part, be white, cisgender, middle class, and frequently non-parents. Recently we decided to revisit this model because it seemed to us to exclude huge swathes of the sex working community, especially those that experience intersecting forms of oppression and criminalisation.

In the spring of 2019 we implemented a small stipend system for our board of directors and did a very intentional hiring round with a specific focus on racial equity on the board. We have been very successful in bringing on an incredible group of directors who have a bright and incisive vision for the future of SWOP-USA, a future that specifically upholds and amplifies the experiences of sex workers faces the highest levels of criminalisation. Volunteerism is often a necessity for our very under-funded movement, however we believe that by compensating our board we can become more accessible to sex workers that might not otherwise be able to give away their time for free, specifically those experiencing a variety of intersecting forms of criminalisation. Leadership development among sex workers who are most directly impacted by criminalisation is a cornerstone of our work at the national level.

The most obvious challenge here is continually raising the funds for these stipends, and also balancing that against the other financial needs of the organisation. We hope that this is something that can be replicated at the Chapter level, because we believe that financial investment in social justice change makers is a necessary step forward.

We’ve seen a much greater board retention since implementing these stipends, and increased interest from sex workers that may not have had the privilege to be able to provide free labour. Of course, we’re not unique in this line of thinking: the sex worker organisation Whose Corner is it Anyway, based in Western Massachusetts, has been using a similar model for the past two years. 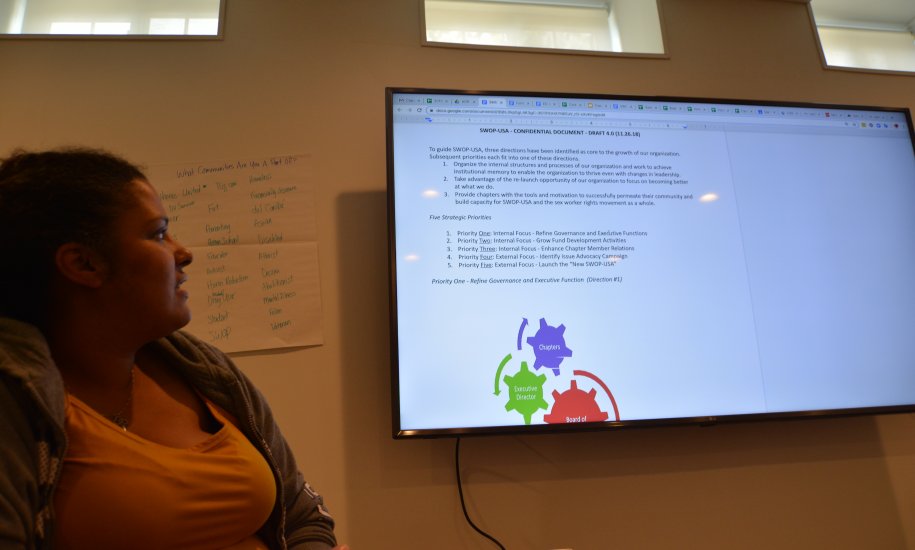 While the topic of sex work decriminalisation is certainly a hot topic at the moment, the real implementation of that remains unknown. Many areas in the USA that have started to consider decriminalisation still seem to favour options that would criminalise the purchase of sexual services, which of course nearly amounts to the same thing as full criminalisation. For 2020, we will be announcing a mini-grant programme, funded through an Open Society Foundation grant for sex worker-led organisations to do direct political advocacy work at a local level to counter the criminalisation of sex work.

Some of our members had the opportunity to attend the recent hearing in Washington D.C. for the Community Safety and Health Amendment Act of 2019. This Bill has been tirelessly fought for and designed by an incredible coalition of sex worker and ally organisations, including DecrimNowDC; No Justice, No Pride DC; Hips; BYP100; Collective Action for Safe Spaces; and Black Lives Matter DC. This Bill would fully decriminalise sex work between consenting adults, and it is a landmark piece of legislation in the USA. However, national organisations, who support a carceral approach and oppose the rights of sex workers, flew in to make false and egregious claims about the Bill and its authors.

The Council Committee has since announced they will not be taking the Bill forward at this time. We have a long battle to fight, but sex workers are patient and persistent, we believe that we will win.

As a national organisation we frequently discuss the need for healing within the movement, healing of individual organisers and activists, and healing within our communities. The individual struggles and traumas that many of us have experienced are living in our bodies and minds, and creating complications as we try to progress forward as a movement. Increasingly the need for a healing justice lens is making itself apparent, and we need to commit ourselves to healing ourselves and our communities.

In Emergent Strategy by adrienne marie brown (a SWOP favourite book!), the author discusses how starlings flock by watching the seven closest birds to themselves and moving in concert with them, this is done so quickly that is almost imperceptible. In doing this, the leadership of the group is ever-shifting but they continue on together to their shared destination. How can we better embody this in our organising for the rights and safety for sex workers?

Much of the future of our movement is unknown, and is vastly complicated by the disparate experiences we come from and live every day, but we will continue to work to increase understanding and solidarity. We can build a future free from prisons, police violence, white supremacy, and hetero-patriarchal oppression but we must dare greatly to get there.