(Image: Laure McElroy and Carol Leigh of the Sex Worker Festival. Laure passed away in 2018.)

The San Francisco Bay Area Sex Worker Film & Arts Festival has provided a forum for sex worker film and video makers since 1999. The Festival has since expanded to become a vibrant venue for performances, workshops, visual arts, political organising, skills sharing and ever-expanding events for sex workers from San Francisco, Oakland, Berkeley and from around the world.

BAYSWAN (Bay Area Sex Worker Advocacy Network) is a sex worker rights organisation founded by Carol Leigh, Johanna Breyer and Dao Passar (Exotic Dancers’ Alliance). BAYSWAN had just finished an extensive project in 1996, launching the Board of Supervisors San Francisco Task Force on Prostitution. The Bay Area prostitute activist community was undergoing tensions as well as a lull in organising, although dancers were organising, even unionising, effectively in the city. Leigh was seeking a project for BAYSWAN that would be more directly reflective of cultural and social aspects of sex workers and our communities.

At the same time sex worker activism was burgeoning in the Northwest states, Oregon and Washington, so sex worker community art had a stronghold in the US Northwest. Among these activities, for example, was Danzine, a harm reduction resource and zine in Portland organised by Teresa Dulce. Meanwhile, Annie Oakley had launched Sex Workers Art Show (1998) in Olympia, Washington which developed into the long run of the Sex Workers Art Show Tour (http://sexworkersartshow.com/ ), traveling around the US each year for nearly a decade.  This was an extremely influential project as a large percentage of current sex worker activists were introduced to this issue within the context of this tour.

In the late 90s several San Francisco sex workers and friends travelled to Portland, Oregon for an exciting debut of the first sex worker festival in the US, “Sex by Sex Workers.”  In 1998 Danzine and Velour Productions, activists Teresa Dulce (Danzine) and Marne Lucas, a filmmaker in the erotic realm, produced an event that was several days long, including movies and workshops. At that point, film screenings were not the regular events in the sex worker communities in the US that they are now. A powerful film was central to this launch, “Gun for Jennifer (1997),” a sex worker revenge thriller by sex worker Deborah Twiss and her partner Todd Morris. This movie was one of the centerpieces of the event, catapulting the importance and passion of sex worker film in general.  This genre also inspired “Baise Moi” by sex worker artists Virginie Despentes and Coralie Trinh Thi. In general film festivals were becoming extremely popular across the US so that sex worker film was a crucial genre for the times. This launch of the Danzine/Velour festival inspired BAYSWAN members to return to San Francisco to launch our own San Francisco Sex Worker Film and Arts Festival in 1999, bringing “Gun for Jennifer” to San Francisco, in what was ultimately known as the San Francisco Bay Area Sex Worker Film and Arts Festival. 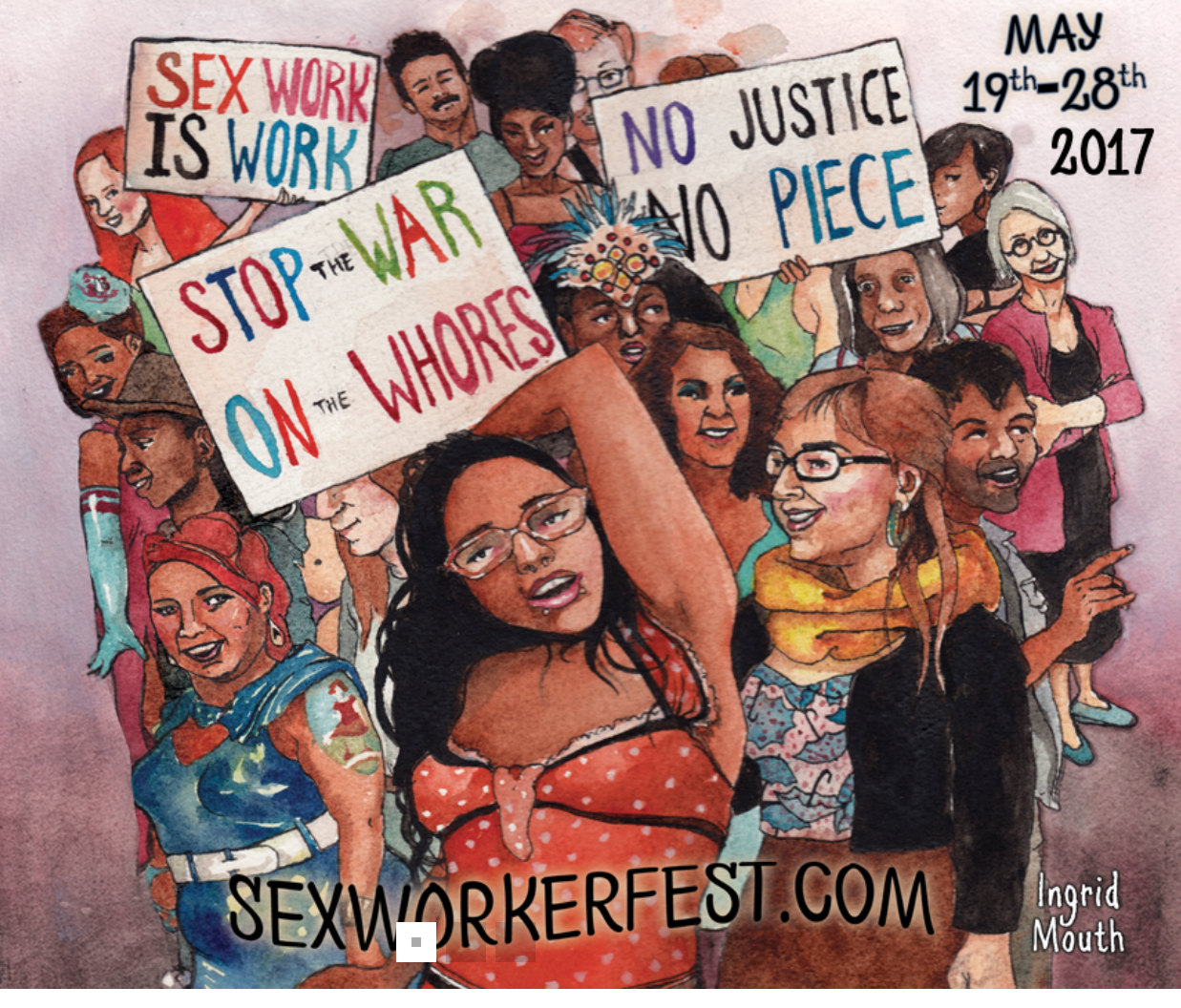 The San Francisco Bay Area Sex Worker Fest screens at theatres around the San Francisco Bay Area. Videos originate from all over the world. We have also assisted in curation of screenings at festivals in the US and a few international locales. Many of the movies we have screened are listed on our archive (http://www.sexworkerfest.com/videos/)

Criminalisation of prostitution (direct personal contact) is based on state rather than federal laws. In one state, Nevada, prostitution is ‘legalised’ in that it is permitted within specific licensed contexts (aka brothels) and only in specific counties (based on county laws).  The system in Nevada also requires health checks and registration/licensing of individual sex workers.

One of the Festival’s central areas of focus is anti-racism, as well as representation from sex workers who are under-represented in the sex worker movement. In general our format responds to the current needs of sex worker communities by partnering with other organisations which populate panels or conduct day long skills sharing events.

We offer a range of workshops during our festivals ranging from healing performance art classes for sex workers, providing occupational support and skills (in collaboration with the St. James Infirmary), and discussions of a range of issues including harm reduction, political advocacy, mental health and much more. The project itself offers sex workers opportunities to engage in sex worker events as performers, producers or volunteers.

Erica Fabulous developed the communities favorite event for our Festival, Whores’ Bath, a “Magical Healing Spa” by and for sex workers. We offered a day of massage, workshops, healing modalities and sex worker community. (http://whoresbath.org/) 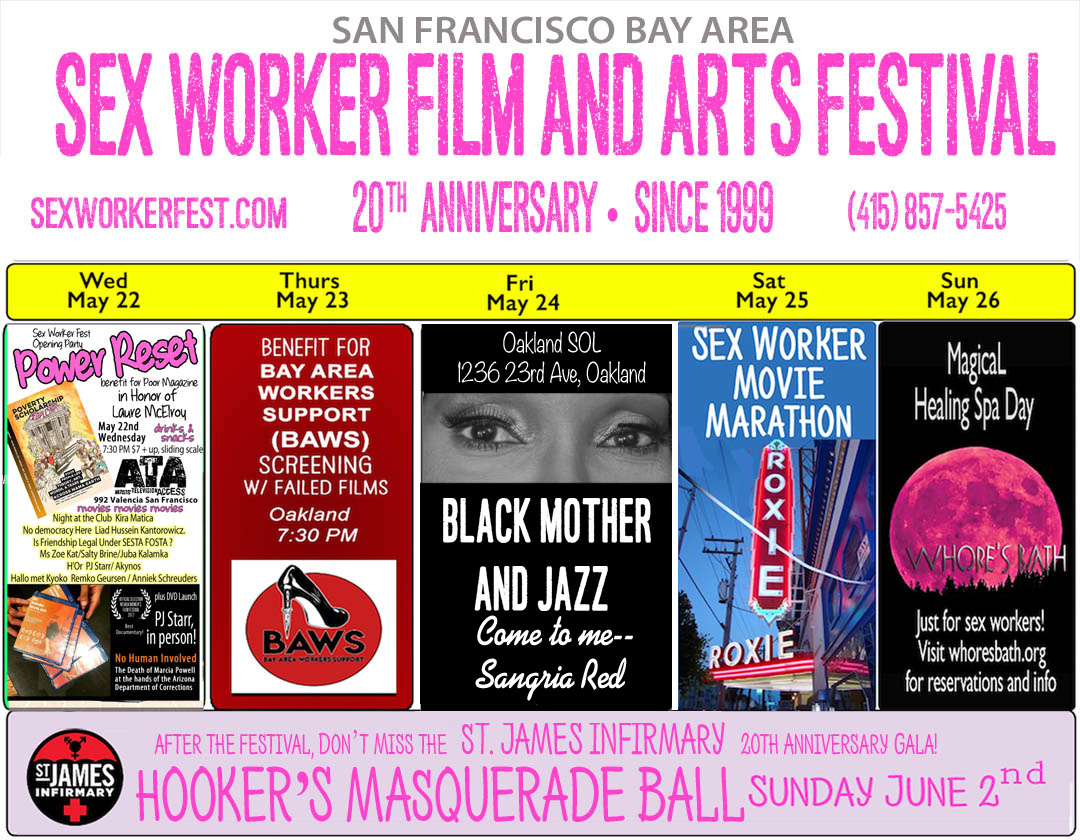 The Festival is primarily an anti-racist political project, in the format of a cultural/film festival. We felt that it was crucial to expose sex workers as well as supporters to diverse representations of and conditions for sex workers around the world. During the late 90s the middle-class sex worker movement was burgeoning in the US.  Although the original sex worker rights movement was based on support for those sex workers who were most marginalised, as the movement grew a great number of current sex workers came forth with a range of priorities based on abuses suffered due to their sex worker status. These injustices included being deprived of child custody, fear of arrest, expulsion from families, escalating stigma in the media, abuse and even blackmail by domestic partners, and much more.

The Festival wanted to bring an even wider understanding of conditions for sex workers including those who were impacted by arrests and incarceration, drug criminalisation, generational poverty, racism (also from within our communities), transphobia, police abuse and more.

Films by sex workers from all over the world brought a greater understanding of conditions for sex workers to our diverse communities of sex workers and allies in the Bay Area. Our Intersectional Mission was central to our purpose and was at the basis of all our work.

“We are anti race, class, gender, age, ability, size and sexual identity oppression. We strive to increase the involvement of politically underrepresented sex worker communities such as trans folk, workers of color, street-based workers, and workers who transcend the racist, sexist, heterosexist, white-supremacist norms and standards of mainstream beauty.”

“We push the margins of the movement into the center, working to shift paradigms in joint struggle, we strive to cultivate leadership of sex workers that are marginalised within the sex workers movements. We highlight the artistic endeavours of workers in all aspects of the sex industry because whore culture is real, present and on a corner, in a bar, in a hotel or in a bedroom community near YOU.”

The Festival was always a small project organised by a core group of sex worker producers, which included Carol Leigh, Erica Fabulous and Laure McElroy. Other sex workers joined us as producers for individual projects, performances and events. Funds were used to provide payment to sex workers as performers and producers.  The Sex Worker Festival project simply brought together a community of sex worker artists and supporters, with an emphasis on events and performance by sex workers of colour.

The Festival has regularly stretched to 10 days long so it’s always a big event. Each festival is a major challenge. Most of our festivals include a major challenge from artists cancelling, to funds stolen by a non-profit org (not sex workers), to internal challenges around unlearning racism. From the beginning we decided to produce the Festival biennially (every other year), in order to limit the stress. Other strategies are to keep the organising process simple. We use a “Backstage Wiki” taught to us by a sex worker. https://docs.google.com/document/d/1m6bk5Zkb6iwGcDiH6YXnlYR1SkTCca2thtoxSs4WDJc/edit?usp=sharing

In 2016-2019 we faced three serious challenges. In 2016 Carol Leigh, founder and one of the three main producers, was diagnosed with cancer and has since been on chemotherapy. In 2018 Laure McElroy died of an overdose. She was another of our primary producers. The other member of our team, Erica Fabulous, was training to be a licensed therapist (and now has a large sex worker clientele). Our production group was also based on our friendship and we were all very close. The Festival prevailed however. We were hopeful that we might make it to our twenty-year anniversary, and we did. In 2020, however, we faced issues of Covid, so we stepped back in our work. 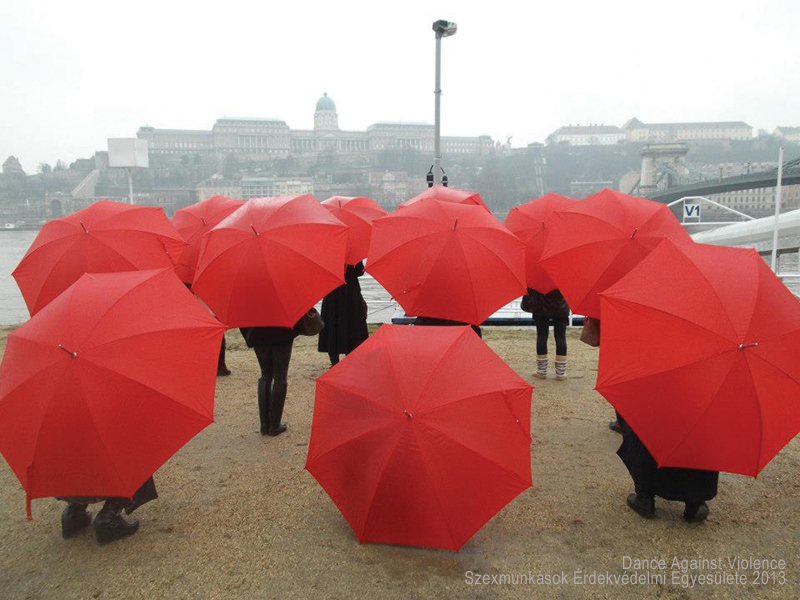 The Festival was primarily produced by a small core of sex worker activists. This approach was, in part, a response to local (and general) difficulties that emerge while organising larger projects. Based on our long-time experience, we employed strategies to keep the workload manageable such as skipping a year between festivals and prioritising local, rather than national or international, participants. We didn’t focus on fundraising at all but were fortunate that a series of donors stepped forward. We ultimately evolved to provide free tickets to sex workers, so that tickets, in general, were by donation. We raised more money in that manner than when we had sold tickets.

Although this minimal organising system supported our mental health, in the course of this strategy we did not build a plan for sustainability of the project and our eventual efforts have not been successful.

We presented a partially online festival in 2019 which was successful and simple.  Twenty years is a good run, and perhaps we will reassemble after this health crisis. Our Sex Worker Fest Video Library is a great resource, and we plan to strengthen that project for the future and review options for online screenings and distribution.

The San Francisco Sex Worker Festival was all about the diversity of messages. The above story of our evolution sums up our efforts to present messages by sex workers, particularly those most impacted by criminalisations, transphobia, stigma, poverty, ableism, racism, xenophobia (and more) …as well as those under-represented in our movements. For sex worker organisers, leadership from these communities is crucial, supported by leadership development and support.

For those outside the movement, please visit the video library of the San Francisco Bay Area Sex Worker Festival http://www.sexworkerfest.com/videos/ for art, politics, wisdom and messages from sex workers all over the world.